Eight young foodservice equipment professionals got the chance to visit Host Milan 2019, courtesy of a special trip organised and sponsored by Williams and Falcon.  They were chosen in association with the CEDA Academy, and the trip was a reward for their hard work and dedication to the industry. 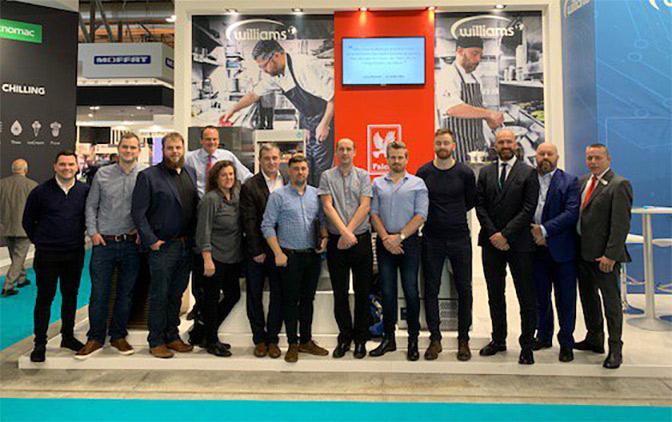 The group got to check out the innovation and creativity on display at the vast Host show, where most of the world‘s leading foodservice equipment brands were represented.  They also received on-stand training from Williams and Falcon, as well as several other Ali Group companies who were exhibiting at the show.

Advance Catering’s Luke Boxall was very impressed by Host Milan. “It’s the sheer scale of the show, along with the accessibility to so many UK and international suppliers,” he says.  “It was great to see so much innovation from so many UK suppliers.”

He describes the trip as ‘a unique experience.’  “It wasn’t just the show, the hospitality from Williams and Falcon, and the insight into so many different equipment categories” he says, “It was also the chance to spend time with a group of younger members of the industry, from competitor companies.  It was really useful to get their perspectives and to exchange ideas.”

Several products impressed Luke, including Williams’ new variable temperature Chef’s Drawer.  “The reduced footprint is definitely going to be useful within compact kitchen designs,” he says.  He also highlighted the Falcon flexi pan, “I’m a big fan, it’s such a useful and diverse piece of equipment.”

Lainox was one of the other Ali Group companies the group visited.  “The way they presented the equipment, in the format of a games show, was just brilliant,” says Luke.

Malcolm Harling, sales and marketing director at Williams, says the sponsorship worked well.  “All eight said they had very much enjoyed the trip and felt it was well worthwhile,” he said.  “It’s really important that we encourage young talent to stay in the industry.  We certainly hope to repeat the exercise at Host 2021.”

Peter McAllister, managing director of Falcon, was also on hand to welcome the group.  “These professionals are the future,” he said.  “They showed considerable knowledge and expertise, and I enjoyed spending time with them.  They thoroughly deserved their Host Milan experience for their dedication to the industry.”