It’s the time of year where festive planning is underway. From presents and parties to friends and family meets, food and drink are typically top of the list in preparation for Christmas. It’s generally the season where the purse strings loosen, especially when thinking about the main event, meat.

The traditional Christmas turkey is of course a popular meat on most household and commercial kitchens menus, but other meats, like beef, are proving just as popular too.

In fact, dry aged beef, or dry aged meats in general, is a growing trend, with demand at butchers soaring.

“With the possible shortages of turkey this year, people have been looking for alternatives. Aged beef is a wonderful choice for Christmas dinner, very flavoursome and the price is on par with a turkey now,” revealed Stephen Hill, owner and master butcher at Perrys of Eccleshall, (pictured below). 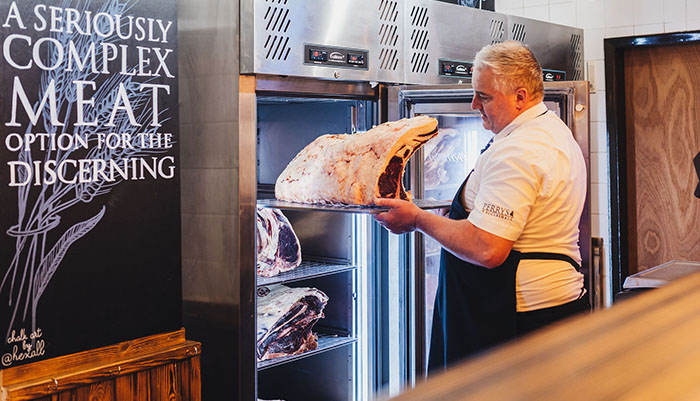 Stephen is no stranger to meat ageing and has racked up several years’ experience in the field, while continually expanding his capability of ageing more meat through acquiring additional Williams Meat Ageing Refrigerators.

From having one cabinet in his shop, Perrys has four Williams Meat Ageing Refrigerators that all play significant roles when ageing meats – even renting some space to customers with special requests, with their current oldest beef at a staggering 18 months.

“Our aged beef has been such a hit with customers we need much more capacity to keep up with demand, as well as providing room for other meats too,” says Stephen. “For example, as a result of the flavour of the aged meat, we sold 50% more rib of beef last Christmas. It’s profitable, too – we can add £5 per kilo on retail sales.”

Another advocate of meat ageing is Arthur Howell, owner and master butcher at Arthur Howell Butchers in the North Norfolk coastal town of Wells-next-the-Sea and nearby Burnham Market, who has also seen an uplift in sales after purchasing a Williams Meat Ageing Refrigerator. “There’s no doubt it’s had a positive impact on business.”

“Customers come in all the time asking about the beef,” says Arthur (pictured below). “We can then talk to them about it, tell them about which farm it came from, how the ageing changes the flavour and tenderness of the cut. It adds a touch of theatre, it’s a great point of interest.” 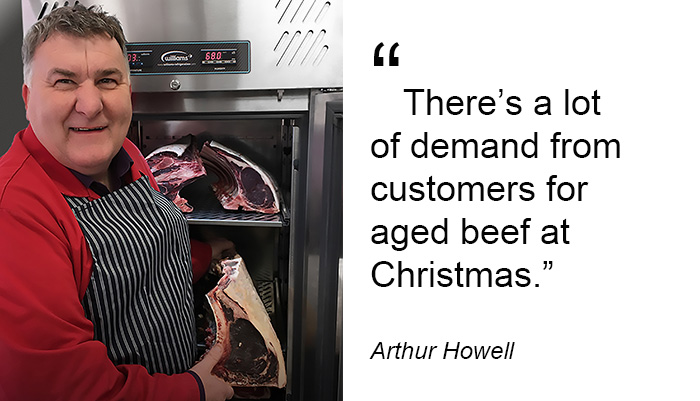 Back to Perrys, other meats they have experimented with for the festive period are geese, duck and venison, while also working with pork and lamb for the New Year.

So how popular has dry aged beef been in the run up to Christmas this year?

“All our six month aged beef has been sold for Christmas already and we’re currently preparing a batch of three month aged beef, although that’s going quickly too,” said Stephen.

“We’re currently holding four different kinds of beef for customers. One will be sent to Barbados to help the customer celebrate the New Year, and we have two pieces from a Dexter cow and one from a Belted Galloway,” he added. “Being able to offer this service to customers with their preferred beef has opened up extra avenues of income that weren’t possible before we got our meat ageing cabinets.” 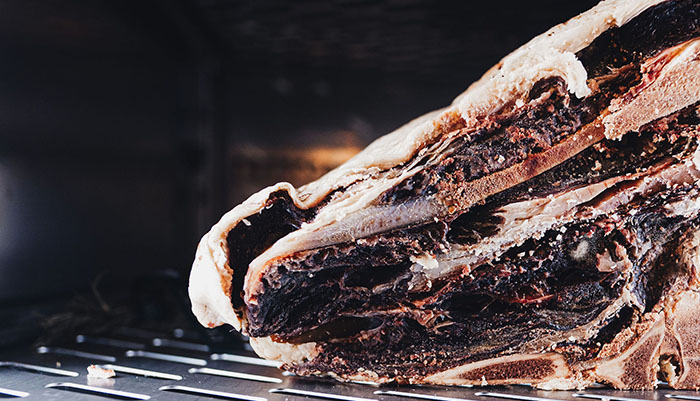 The demand at Arthur Howell’s has also been just as strong. “There’s a lot of demand from customers for aged beef at Christmas,” Arthur says. “It’s not something you can easily find everywhere, which means we can offer something really special.”

While the basic process of ageing meat is simple, there’s an “art” to it, says Stephen. “It’s definitely somewhere between an art and a science. You need to make sure you’ve got the conditions right, and those can change daily.”

During the ageing process, moisture in the meat evaporates, shrinking it slightly while concentrating the flavour. At the same time natural enzymes and harmless microbes begin to break down the meat’s structure, allowing natural fats to further concentrate the meat’s taste.

The process of ageing beef, and other meats, requires a carefully controlled climate to do it properly, requiring a delicate balance of temperature and humidity. 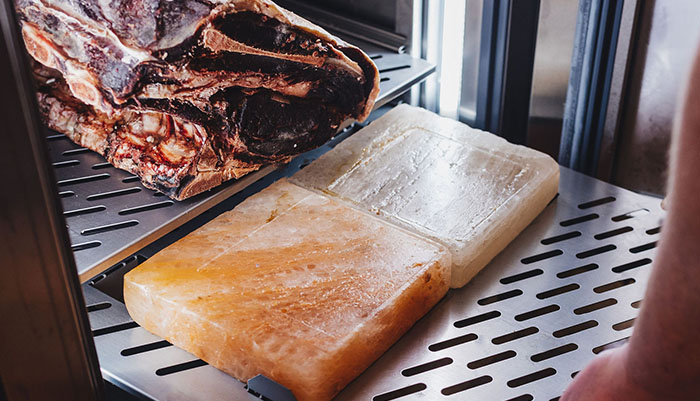 The Williams Meat Ageing Refrigerator operates at the ideal temperature range between +1 to +6°C and provides humidity between 60-90%, while Himalayan salt blocks both manage moisture and improve the meat’s flavour.

Constructed from stainless steel, the robust and reliable Meat Ageing Refrigerator has been designed to work in ambient temperatures up to 43°C. The interior has room for four 2/1 GN sized shelves capable of holding up to 20kg each, with hanging rails as an alternative option.

Incorporating a variety of other key features, from an insulated glass door to energy saving LED’s and barrel lock, the cabinet acts as an eye-catching front of house display and a point of interest for customers. The additional option of further customisation through the Williams foodsafe vinyl wrap Chameleon service, can enhance its appearance in any setting.

Williams Refrigeration worked in conjunction with butchers and operators ranging from Michelin starred chefs to casual dining to provide a comprehensive meat ageing solution suitable for a range of different businesses. Alongside the Meat Ageing Refrigerator, coldrooms can also be designed to create the precise climate conditions required to age meat while also offering an eye catching way to display product if used front of house. 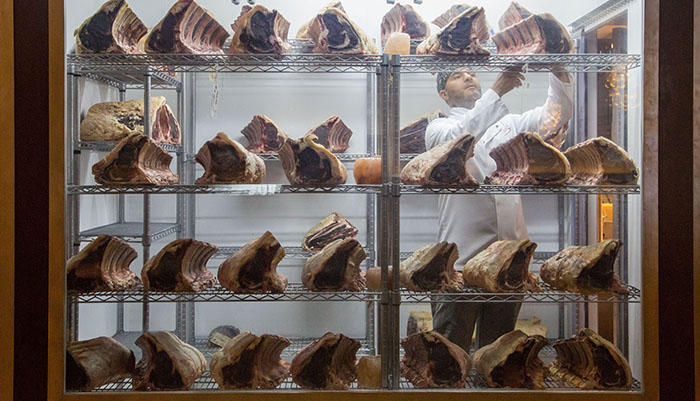 A final festive thought brings Stephen away from meat ageing but to the important role a Williams Blast Chiller/Freezer plays at Perrys. “We use that to quickly cool down our cooked products,” he says. “Scotch eggs, pork pies, cooked hams – the blast chiller works by cooling the product very quickly, getting it down to 3°C without compromising on quality. If you cool things down the wrong way they can go crusty and bad, but the Williams blast chiller gives us great, consistent results.” 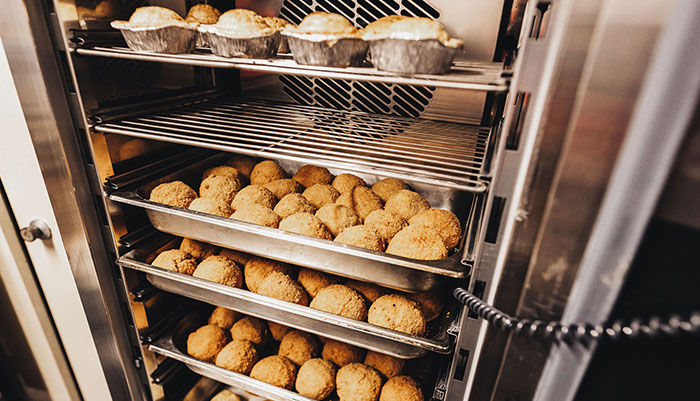